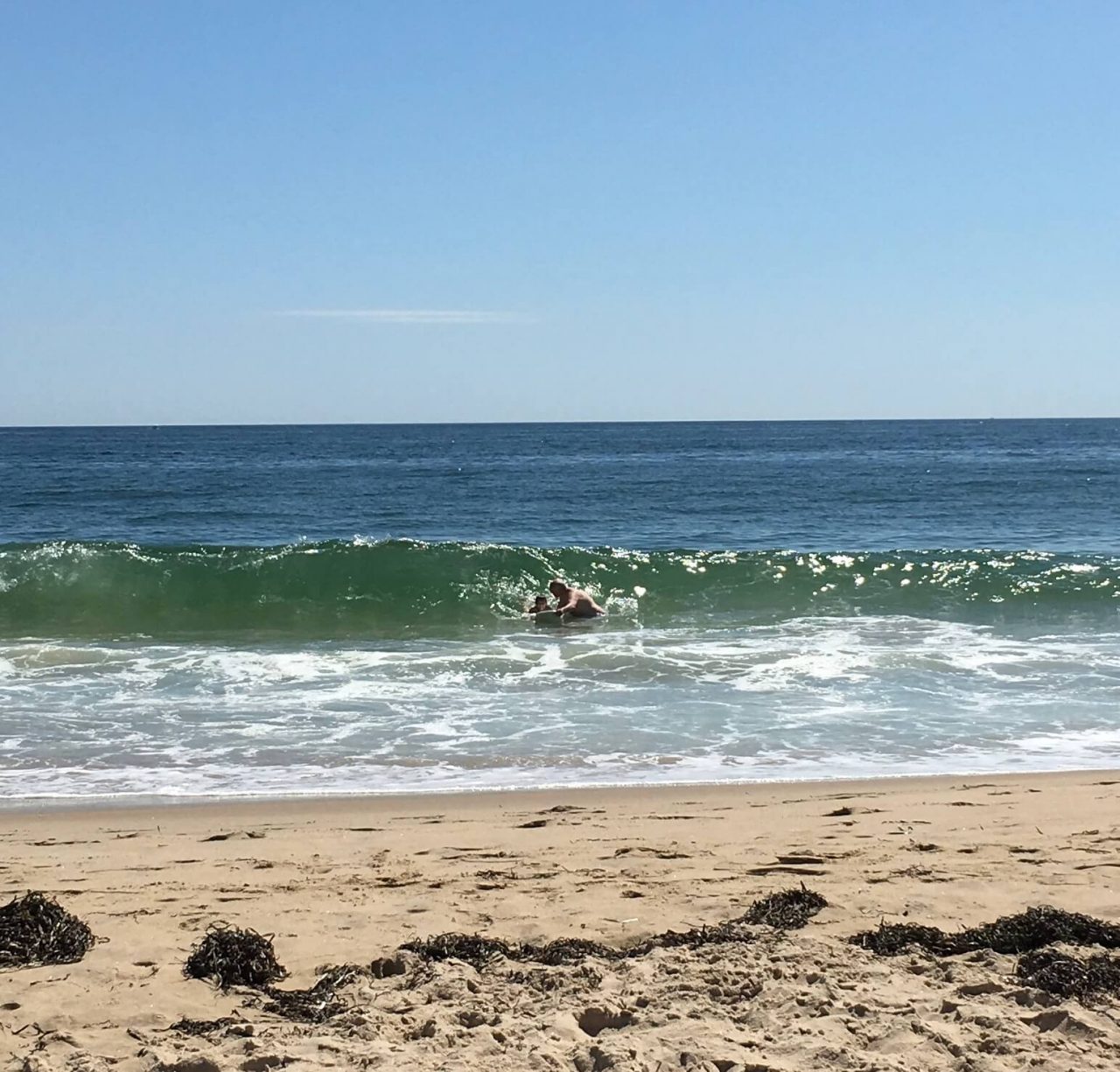 One of the things I love about the beach is people watching. Bearing witness to other people’s stories, a pastime my father adored and shared with me at a young age. As I sat gazing out at the ocean on a sterling summer day, I became completely captivated by a story unfolding in the waves.

They were strangers, a man and a boy. The man, perhaps in his early seventies, robust and tan, was enjoying body surfing as if he were a kid. It was clear that he knew how to read the waves, which were near perfect to catch a ride that day. He stood almost chest deep in the water, watching, waiting. Then, as a good wave grew, he would confidently push forward onto his belly, arms extended, elbows tucked in close to his ears. Wave after wave he rode in until his belly slid to a stop on the sand. His wife, settled in her beach chair with a book, glanced up every so often to watch him.

The boy, about nine or ten, a bit pale and thin, was trying to boogie board. I say trying because he hadn’t gotten the hang of it yet. He was tentative, and clearly frustrated, but persistent. His father stood dry on the beach, mostly disengaged, occasionally shouting inaudible instructions over the waves crashing between them.

The boy was afraid, hesitating as each new wave rolled towards him. He kept missing his chance to catch a wave at exactly the right moment. The man continued body surfing a few yards away. Each time he pushed off just as a wave began to crest at his back, carrying him all the way to the shore.

At some point the boy began watching the man, perhaps trying to figure out his secret. And then I noticed the man watching the boy. I imagined he was silently willing him to seize the moment when a good wave began to roll in.

And then it happened. I saw the man and boy connect, standing out in the water, side-by-side, waiting for the next big wave. The man began to instruct the boy on precisely where to grip the board so that he could hold it further out in front of his body. He looked back and saw a beautiful wave approaching. As the boy grasped his board tightly, the man reached over and just as the wave began to crest he gave the boy a good push.

That was it. He’d caught his first wave, and holding on for dear life the boy rode all the way in until his board hit the sand. He stood up beaming and triumphantly looked back toward the man, who was standing out in the waves with his arms up in the air. The victory V. His standing ovation, a validation that said, “Good job. You did it!”

I too was beaming, having become completely invested in their story. Emotions suddenly pushed to the surface, as the kindness and connection I’d just witnessed expanded. I somehow vicariously felt the boy’s exhilaration, as that wave lifted him up and carried him to the shore. And I could feel the man’s heart swelling with pride as he watched.

I thought about the power of that push. Sometimes that’s all we need. Someone who sees our struggle and takes the time to teach us something new, and to give us a good push at just the right moment. It was a poignant reminder that we all need a helping hand sometimes.

That scene on the beach remains etched in my memory. Two strangers connecting in the waves. A kind gesture shifted the story from tentative to triumphant. What if more of us shared our gifts and experience on a daily basis, creating moments of connection and kindness?

Facing uncertainty and learning new things can be frustrating and scary, at any age. But we’re not meant to do it alone. Life is a collaborative process. People need people. Imagine more stories like the man and the boy unfolding around the world. Perhaps we could all use a little push these days. 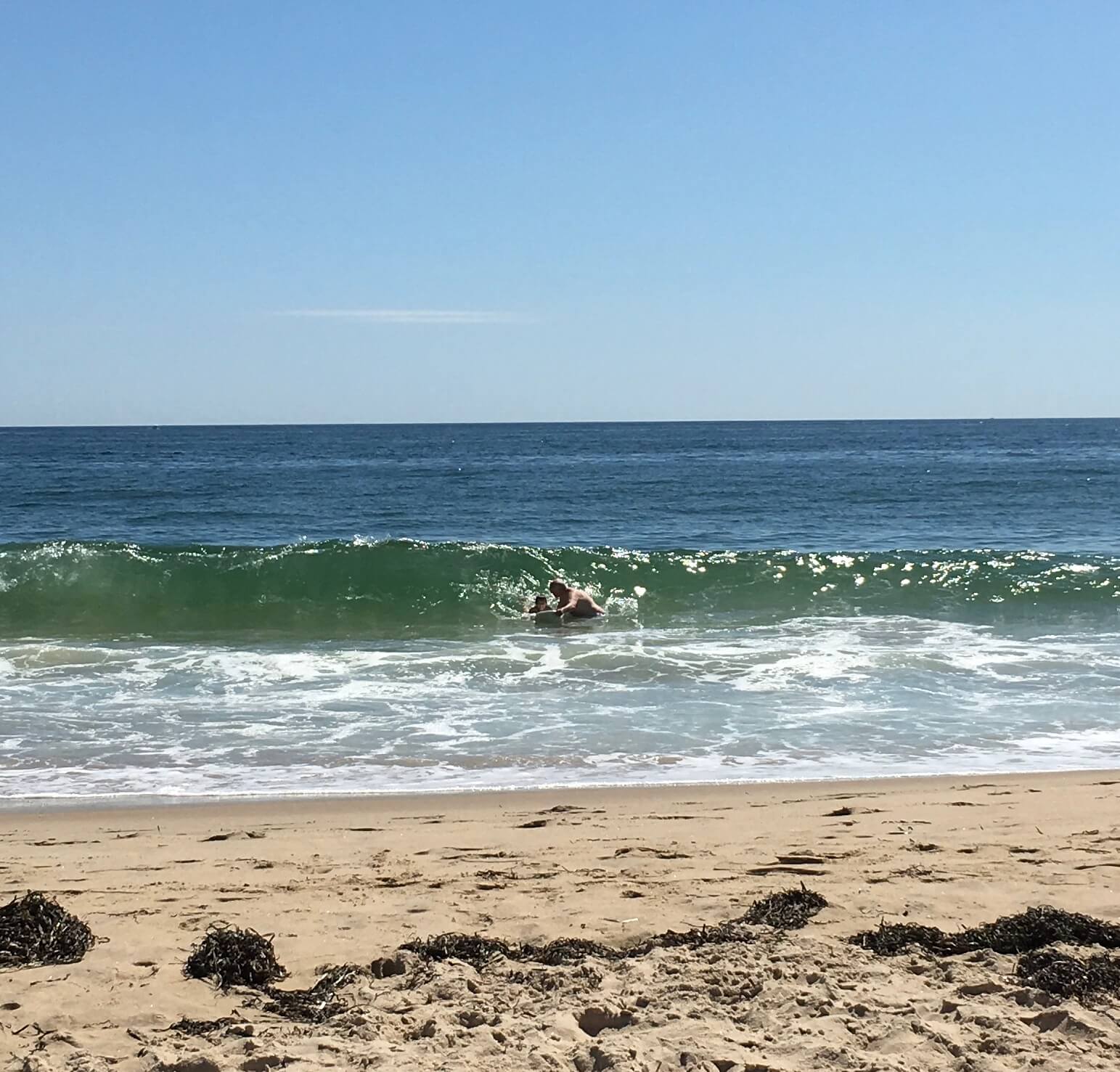